IS THE TEA YOU ARE DRINKING TOXIC AND THE TEA BAG IT IS IN? 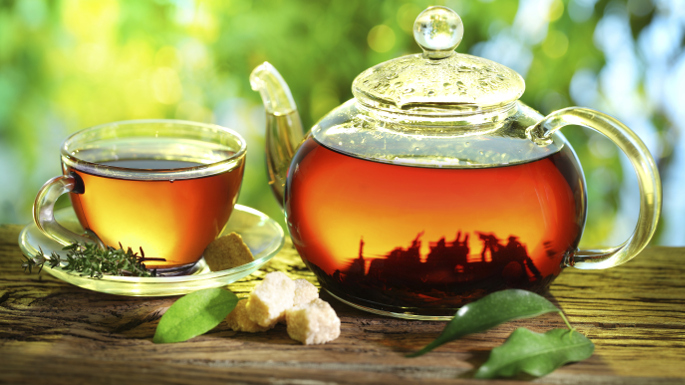 After much research, I will never look at tea the same again. I drink tea every day and I love the tea experience. I always have lots of varieties of loose tea to choose from at home but I did not realize that my tea may be toxic! 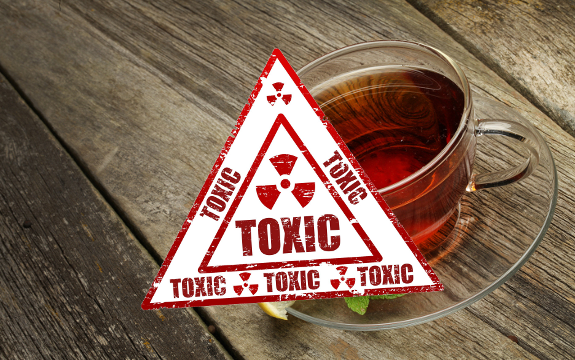 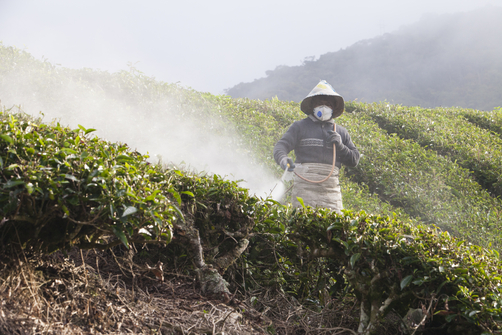 Although tea is widely thought to be a healthier source of caffeine than coffee, soda or energy drinks, conventional tea brands have been shown to contain high levels of toxic substances such as fluoride and pesticides, artificial ingredients, added flavors and GMOs(modified corn starch and soy lecithin). The levels found in these products are so high that they are considered unsafe for consumption. As with most products, all tea is not created equal.  Most teas are not washed before being dried, thus non-organic teas contain pesticide residues. Some tea brands (even those claimed organic or pesticide free) have recently been found to contain pesticides that are known carcinogens and in quantities above the US and EU limits. Tea plants drink up pesticides and heavy metals like a sponge.

Research has revealed some toxic facts about common tea brands and tea bags. Reports from India and China find high levels of banned pesticides in tea products, pointing to a lack of enforcement on pesticide use in major tea exporting countries. In the U.S., the Food and Drug Administration (FDA) consistently finds high levels of illegal residues on imported Tea that eventually finds its way to the American consumer. These include permethrin (a synthetic pyrethroid, linked to cancer and endocrine system disruption), DDE (a metabolite of DDT, banned in the U.S. in 1972), heptachlor epoxide (a derivative of the pesticide heptachlor, which was banned in the U.S. for use in agriculture and as a termiticide due to its carcinogenicity and persistence in the environment) and acetamiprid (a bee-toxic neonicotinoid). These issues increase consumer exposure to a dangerous blend of pesticides in conventional tea. 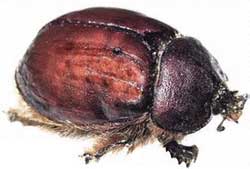 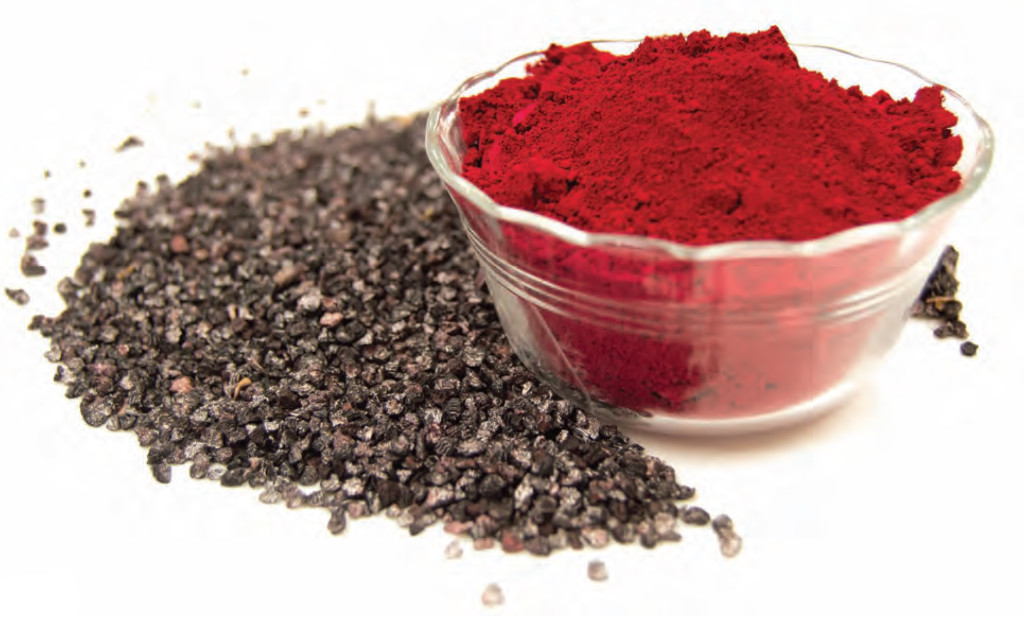 The question is Do the CONS outweigh the PROS when it comes to drinking tea? Some teas are laden with cancer-causing pesticides, GMO’s, and flavorings labeled natural.  These flavorings are additives such as: Castoreum (a substance taken out of glands from a beaver that are located near the anus, majority of raspberry flavored foods are made from these secretions), Carmine-Natural Red #4 (made from dried and ground up Cochina beetles, gives tea and foods a red color); however, many of these brands market their teas as being beneficial to your health, yet do nothing to control the toxins existing in the teas.

There are great benefits from tea if you select quality organic loose leaf.

GREEN TEA: is made from un-oxidized leaves and is one of the less processed types of tea (with white tea the least) and therefore contains the most antioxidants and beneficial polyphenols. It has a high concentration of EGCG and has been widely studied. Green tea’s antioxidants may interfere with the growth of numerous cancers; prevent clogging of the arteries, burn fat, counteract oxidative stress on the brain, reduce risk of neurological disorders like Alzheimer’s and Parkinson’s diseases, reduce risk of stroke, and improve cholesterol levels.

BLACK TEA: Black tea is one of the most widely consumed teas. Made from fermented tea leaves, black tea has the highest caffeine content and is the basis for flavored teas like chai, along with some instant teas. The oxidation process causes the formation of two compounds: theaflavins and thearubigins. These compounds give black tea its distinctive taste and color, and also its possible health benefits. Studies have shown that black tea may protect lungs from damage caused by exposure to cigarette smoke. It also may reduce the risk of stroke.

WHITE TEA: Uncured and unfermented. One study showed that white tea has the most potent anticancer properties compared to more processed teas because they hold onto most of their naturally occurring antioxidants. Antioxidants are so important for good health. They protect us from free radicals, fight harmful inflammation, improve cardiovascular health, reduce our risk of chronic disease. White tea has impressive anti-bacterial and anti-viral qualities and kills the bacteria that cause plaque, tooth decay, and bad breath.

OOLONG TEA: falls somewhere between green and black teas, as its leaves are only partially oxidized. Partial oxidation is responsible for oolong’s color and characteristic taste. The polyphenol antioxidants in oolong may help maintain normal blood sugar levels and decrease the risk of developing type 2 diabetes. Oolong tea may help decrease the risk of heart disease, stroke and high blood pressure in some people. The combination of caffeine and polyphenols found in oolong tea may help increase the amount of calories and fat burned each day. This could ultimately help speed up weight loss. Similar to green and black tea, oolong tea may have protective effects against cancer.

ARE YOUR TEA BAGS TOXIC? 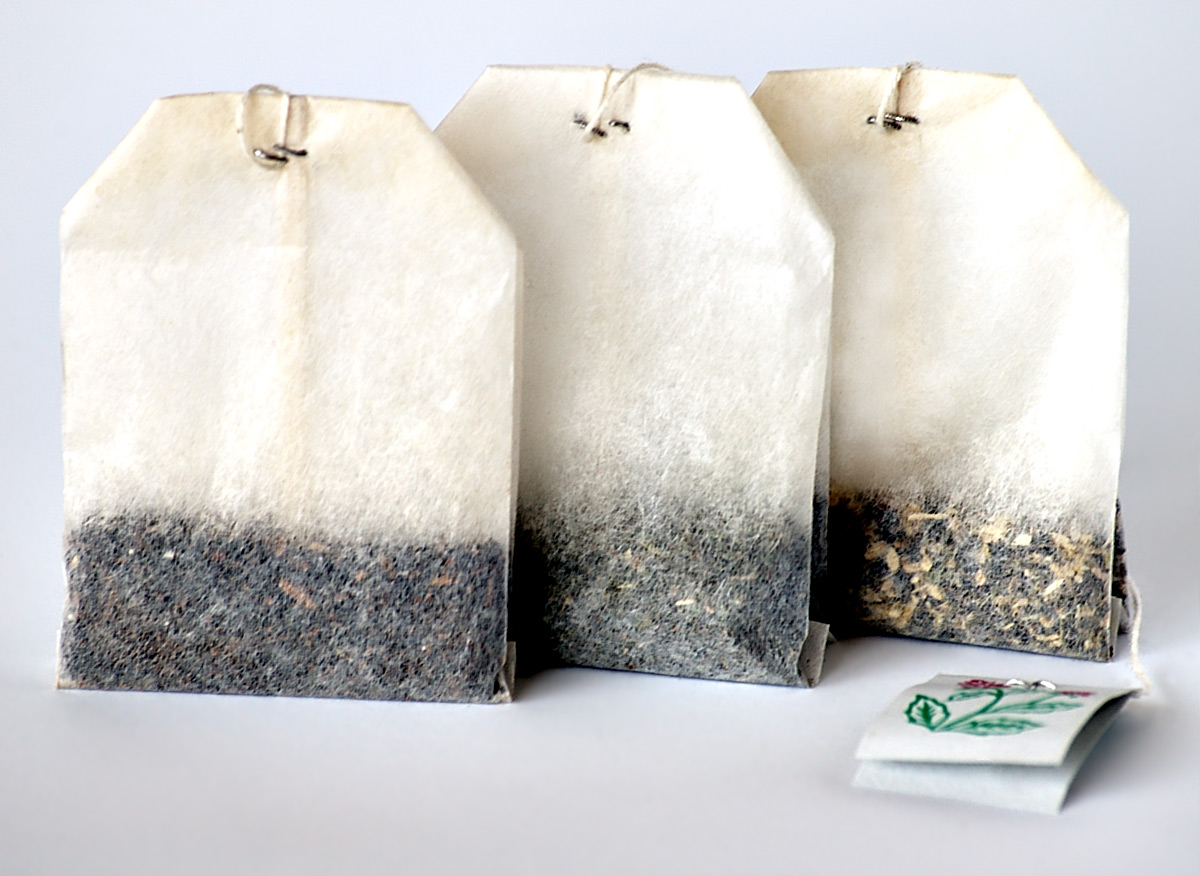 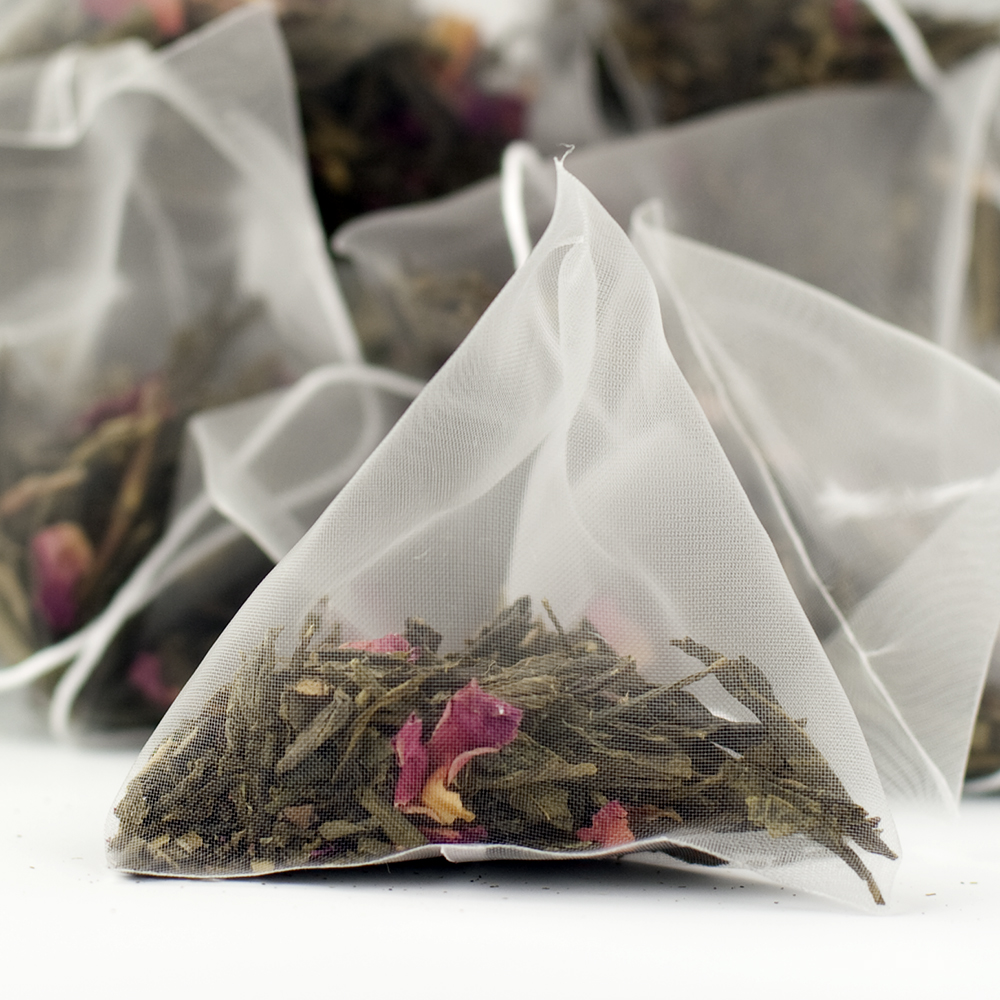 The chic “silky sachet” and “luxurious mesh bags” are all the craze. But did you know that these toxic tea bags are made of plastic and can potentially leak out toxic chemicals when exposed to heat? And paper bags carry a risk of their own because many are coated with a carcinogenic compound! Here’s what you need to know about each.

PLASTIC TEA BAGS are made of different types of plastic—viscose rayon, PVC, thermoplastic, polypropylene, but the most prominent are food grade nylon or polyethylene terephthalate (PET). Nylon and PET are considered two of the safest plastics because they have extremely high melting points; this means it’s less likely that plastic chemicals will leach out of the bag and into your tea. Though both also have very high melting points, there is another temperature point for plastics that needs to be considered: the “glass transition” temperature (Tg), the temperature at which the molecules of materials begin to break down. The Tg of a material is typically lower than its melting point. The Tg of PET is about 169°F, and the Tg of nylon is 116°F. Since water boils at 212°F, this is a major issue: the Tg of PET and nylon are exceeded. So while these plastics are generally considered among the safest in terms of leaching potential, the molecules in these plastic tea bags may still in fact break down and leach out when steeped in boiling water. Unfortunately, neither the Center for Health, Environment, and Justice nor the Centers for Disease Control and Prevention (CDC) have any information on the toxicity of plastic tea bags or the levels of plastic chemicals that might migrate into the tea when steeped in hot water.

PAPER TEA BAGS pose an altogether different threat. They can actually be worse than plastic. Many paper bags are treated with a compound called epichlorohydrin, which is used to produce epoxy resins and acts as a pesticide! Epichlorohydrin is a plastic that helps to keep the tea bags from breaking. The problem is that epichlorohydrin can potentially break down in water…and be released into your drink. The Environmental Protection Agency says drinking water with high levels of epichlorohydrin, over a long period of time, could cause stomach problems and an increased risk of cancer.  The National Institute for Occupational Safety and Health (NIOSH) labels it a potential carcinogen, and it’s been shown to cause cancer in animals, impair fertility, and weaken immune function. And tea bags aren’t the only culprit! Coffee filters, sausage casings, and water filters are also treated with epichlorohydrin.  a compound mainly used in the production of epoxy resins and is also used as a pesticide. 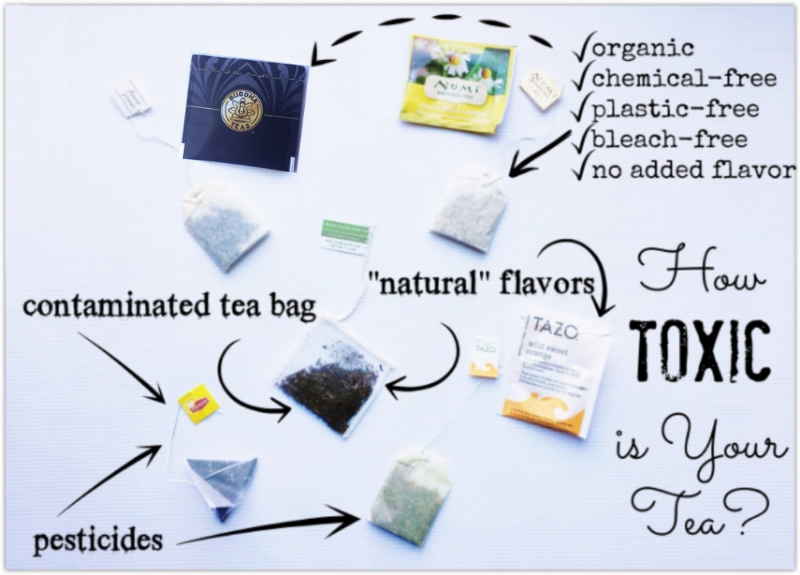 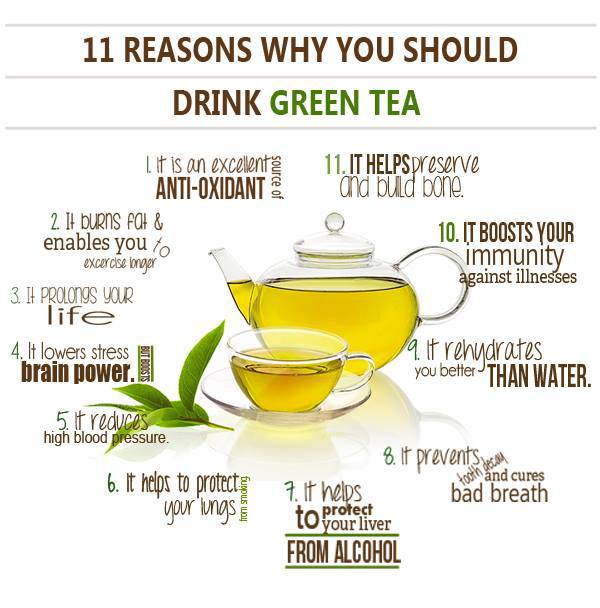 What are we to do?

2.    Always select organic non-GMO teas and Ensure the tea is certified organic by a credible third-party source like, USDA.

3.    Select quality teas which has high antioxidant status.  This will stop some of the impact of fluoride found in tea leaves.

4.    Verify the ingredients at the back of the package and type of tea bags. Look for no added flavors and GMO’s. Do not use plastic tea bags, bleached tea bags or paper bags containing epichlorophydrin.

5.     If you are interested in reducing exposure to fluoride and the harm that may come with it, choose white tea, the tea that is made from young leaves. This does not mean you can avoid fluoride in tea by drinking white tea, only that your fluoride exposure may be less than with other types of tea. Black tea is made from the oldest leaves and the widely researched green tea also has a high content of fluoride. White tea provides almost all the same health benefits as are found in green tea, and it has a milder, more pleasant flavor.

6.     Select teas from Japan. China is the world’s largest tea producer with eight million tea growers, as well as the world’s largest pesticide user. Most tea is not washed before it’s packaged or bagged, so if the plants are doused in pesticides they will be infusing into your cup. In 2012, a comprehensive investigation by Greenpeace found all tea samples from China tested positive for at least three kinds of pesticides, with one-third containing up to 29 different pesticides—many of which are illegal.

8. Jerardo, A. (2012). Import Share of Consumption. Retrieved from http:// www.ers.usda.gov/topics/international-markets-trade/us-agriculturaltrade/import-share-of-consumption.aspx